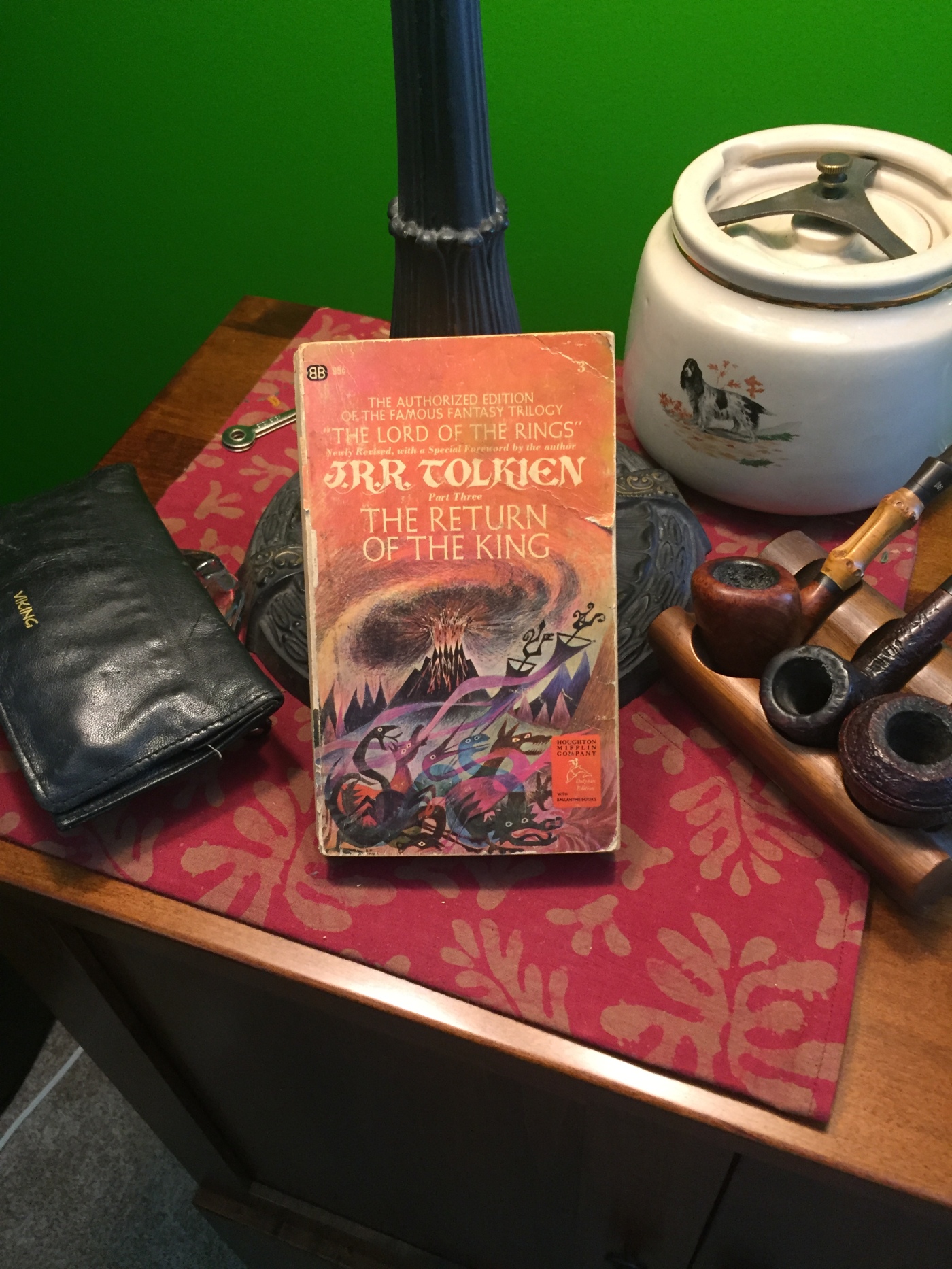 The Fellowship of the Ring was the first thing I read by Tolkien.  Mike Brewer, as per usual, introduced the story to me in the autumn of our nineteenth year.  He told me that the story was unlike anything he’d ever read and that it induced in him a longing, a deep melancholy.  I couldn’t wait to start that book, for the Fall season, for me, is one of melancholy, yet my favorite time of year. Nature is dying, hoping for a Spring rebirth that is never guaranteed.  If this makes me sound depressed, well, it is true.  A smiling, high-functioning depressive, me, someone who looks like he has it all together and is as broken as light through falling leaves.

Mike was in college at U of L and I was in the fire department, at that time. I read as much sword and sorcery fantasy as I could find.  It was my primary means of escape, though you would think that I had little from which I needed to escape.  I was working out, doing martial arts, making car and rent payments, and was horse-healthy.  I looked and felt invulnerable.  Hell, I even fell off of story and a half roof one night at a fire and had minimal bruises to show for it. Yet, I needed to escape.  The fantasy stuff I read shows me, now, that what I was escaping was religion, God, the notion of an active faith.  Howard’s Hyborean Age or Elric’s Melnibonean realm were free of the talk of God.  My heroes had their own rough codes of honor, and God knows that Conan’s faith in old Crom was a hard scrabble one.  In those books, heroes weren’t into being good, adhering to standards of behavior to which I would always fall short. And my faith walk told me that it was all about doing the right things.  Other people of faith, except Mike, wanted to know how good I was being, whether or not I believed certain ways, with “right” defined by their denomination or faith community orthodoxy.  That was what I sought to escape in reading fantasy, and I found that escape expressed marvelously in Tolkien’s work.

True, Frodo and Sam were not large, swaggering heroes, fighting impossible odds and winning each time they took their death-stand-that-would-live-forever-in-tales. Their small stature made them feel more like me, regular and vulnerable, not unconquerable. They did bravely encounter mythic situations, but those situations were different as well, like Gandalf  was  far different than wizards who cast spells from afar and lived in towers made of human bone.  He walked around, drinking beer and blowing smoke rings, as the hobbits did.  I had just taken up the pipe and was cautioned that it wasn’t at all godly behavior. But it was hobbit-like, Gandalf-like, too, and I enjoyed it—still do.  So, as escape lit, Tolkien’s work went down smooth, like ale and a pipe, and wasn’t godly.  In the hobbits and Gandalf, I found people like me doing heroic things, taking on quests much too big for them and just putting one foot in front of the other.

Little did I know that Tolkien’s fantasy let me escape the religiosity of my time even as it set me on a spiritual path that changed—and keeps changing—my life.  And, nowhere is that concept better demonstrated that in Frodo’s failure to complete his quest at Mount Doom. See, at that time, I had not read about Tolkien’s art as “sub-creation,” which means that the world Tolkien created resonates with the values of the deeply christian man who wrote those tales.  Sure, it is full of heroic battles and great warriors, but the end of the quest, where Frodo takes the One Ring for himself totally stopped me in my tracks.  I mean, where was my payoff?  Where was the reward for all his hard work?  Wasn’t I supposed to get a picture of Frodo as the small but hardy hero, who overcame impossible odds?  No.  According to Tolkien’s “sub-creation,” what I got was the idea that a force never mentioned in the story is responsible for saving Middle Earth.

Was it just dumb luck that Gollum slipped off the edge in his ecstasy at getting the Ring in his own miserable hands?  Yet, even if Frodo failed, he was seen as a hero by every one of the men of the west who survived the battles of Pelannor Fields and The Black Gates.  I recall how shocking it was to contemplate that Middle Earth was saved—by Gollum—and that was seemingly by accident. Despite the fact that Frodo was a good and just hero, he failed.  Fair minded, faithful Frodo didn’t have it in him to succeed against Sauron’s power, imbued in that accursed ring.  I remember feeling sorry for him and thinking that I’d have done it, though I could have been nowhere near as brave as Frodo, nowhere near as committed and daring.  I told myself at the time that I would have done succeeded because I understood that doing the right thing was the behavior that was right.  I thought I would have been good enough to remember that the Ring was evil and needed to be destroyed. I really not understand that I had very little in me that would have sustained me in that quest.

At the time, I couldn’t talk to Mike about it.  I mean, how does that conversation go? “Hey, bro, isn’t great the way Frodo completely f@#ks up at the crucial moment?” Intuiting that something else was going on in Frodo’s failure, I simply clammed up about it and let myself rejoice in the minutia of Middle Earth. The rest of the book, which I loved in all its detail, gave me a vision of life that I wanted to live, in some respects, but the end of the quest and the way that Frodo has to bear his wounded heart and body away from all that he has loved, all for which he sacrificed himself, is tough to live with.  But Frodo’s nonviolent response to the world after his failure was crucial, too, and, for a lad who thought swords were cool, his decision to leave fighting up to others was too odd. I simply failed to understand his character.

Yet as I read LoTR almost every year after that—yes, that means I’ve read it all over forty times—the truth of Tolkien’s sub-creation dawned on me and changes my life still.  All the literature which I read about Tolkien has exposed me to a great truth in Tolkien’s work. For, I learned that, as a product of Tolkien’s mind, LoTR has as its central themes “Hope” and “Sacrifice,” which is to say that a human dependency on Grace drives it. Without ever mentioning anything religious, Tolkien gave us a work wherein an understanding of Grace pervades the everything.  I realized in Tolkien’s sense that the closing of his quest is a “eucatastrophe,” an accident that turns out to the good for the heroes of the story. Reading The Silmarillion showed me other stories of his with heroes much mightier than Frodo and just as deeply committed to their cause, fail and are vanquished. Even Feanor, arguably the mightiest hero that Tolkien ever created, fails in his quest, as most people would, and his Middle Earth is not saved.

Yet, Frodo must bear the weight of the One Ring always because he dared to take it on for the good of those he loved. He never said it, but Frodo could only do so from the stand point of trying to do what is right for those you love, and that is a perilous path to travel, because humans—and hobbits—are prone to failure. At some point in our lives, we are all going to “take the ring for our own,” and declare ourselves as God, which is what Sauron was bucking for, what Gollum wanted, and you can see that human darkness in what Gollum’s poor, battered mind gave him to think about, if only he could get that ring back.  That program will always fail, simply because no human has the capacity to see all ends.  Playing God, deciding what is right and proper for everyone, always ends badly.

Gandalf, who refused the One Ring, who asked to be spared that testing of his character, knew that he would fail, and he was a spiritual being, one of the lesser powers that ruled Tolkien’s Middle Earth from Valinor.  Galadriel, too, with three thousand years or more of wisdom under her belt, diminished and passed the test, refusing the One Ring and the power it would give her.  Saruman wanted it, and that desire corrupted and destroyed him.  His ending in “The Scouring of the Shire” is one of the saddest things I’ve ever read, simply because he decided that he would play God, despite putting himself under allegiance to a more powerful being, Sauron, who had the same desire.

Frodo’s quest, though it offered me, at first, the escape I desired from all religious thoughts, took me by the hand and led me right back to the thought that I—none of us, really—am never sufficient in myself, that I need others, and that the best I can do is to love others, pray for Grace, and do the best I can. My own failures in life, decisions I made that hurt people I loved, as well as myself, helped me see the necessity of Frodo’s failure at Mount Doom. And, not surprisingly, most people I talk to about LoTR do not want to talk about Frodo’s failure at The Cracks of Doom. Frodo’s weakness is my weakness, yours too, I might add, and that makes you someone for me to love, even if I don’t know you.  That’s Grace for you.