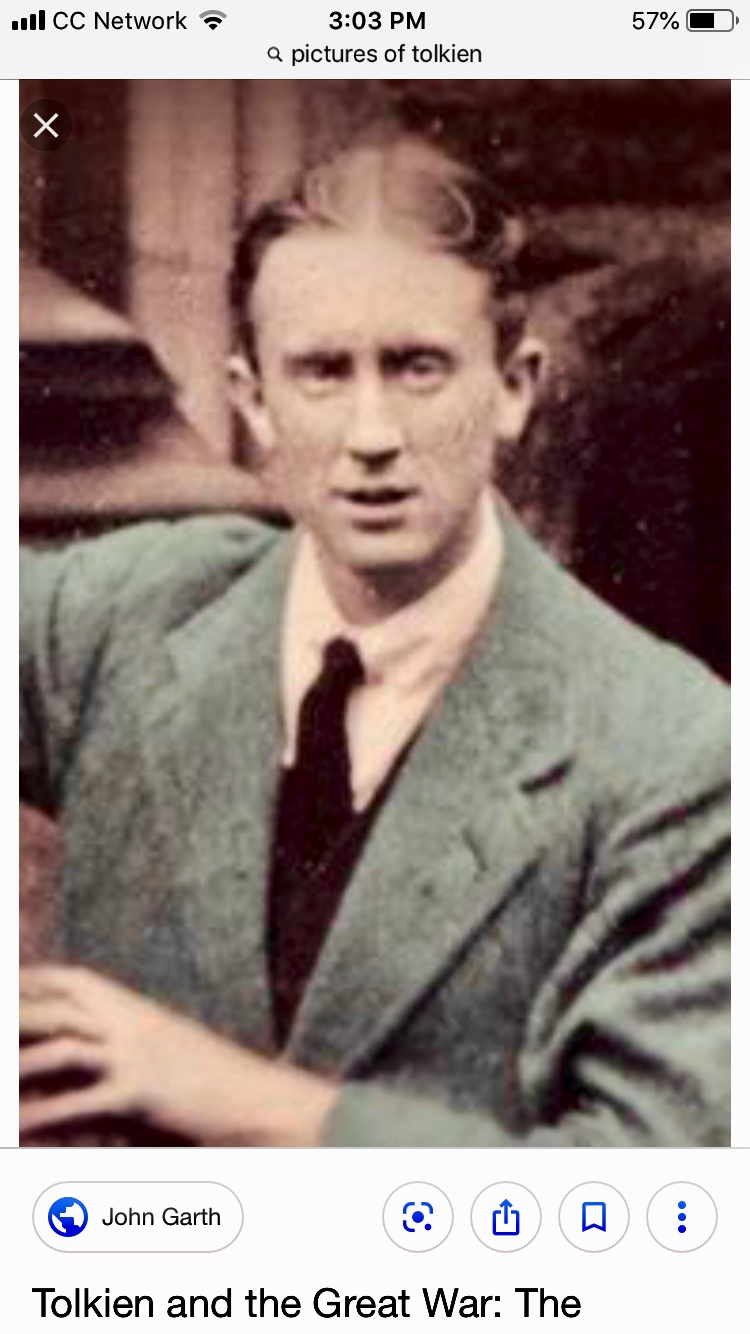 Above, you can see a screenshot of my favorite author, J.R.R.Tolkien.  This shot was taken in his early days, which are also the subject of the new biopic that bears his name.  If you are a devoted fan of this author, I urge you to go see this movie.  It is beautifully shot, paced, edited and a great treat for those who have read this Tolkien’s work.

Now, if you’re like me, you’ve read the biographies of Tolkien, Lewis, and Charles Williams, so much of the content of this film will be drawn from what you already know. My fondness for Humphrey Carpenter’s work with all the Inklings hasn’t stopped me from enjoying this same material many times over. I suggest Colin Duriez’s biography for another Tolkien read, and I have more than doubled my appreciation of Tolkien’s work by reading Verlyn Flieger’s critical commentary, especially Splintered Light. I recommend this movie as another source you can use for deepening your appreciation for Tolkien’s work. I have only one negative commentary, which I will save until the end of this, for it is minor.

Those of you who have read The Silmarillion will recall that Tolkien wrote the “Beren and Luthien” story in part as an homage to his wife Edith. On their tombstones, they each bear the names of that story: Tolkien as Beren, and Edith as his Luthien Tinuviel. Theirs was a troubled love story, and I will admit no movie spoilers in saying that. It has been well documented. What the movie gives us is a set of images that illustrate Tolkien’s devotion to his wife that are nothing less than gorgeous, taking readers back to the images we read of Beren and Luthien. And for this alone, the movie is worth seeing.

The film, while it uses pretty Hollywood faces for both John Ronald and Edith, conveys some of the struggles that the couple went through. Long hours of writing and research marked the reality of Tolkien’s scholastic and creative life, and that had to be a hardship for his wife. She must have spent long, laborious time alone managing their home and family, while her husband slogged away on essays and lectures. She also had to endure hours without her husband while he spent time with his male colleagues. Lewis recounts that many of their weekly meetings outside “The Bird and The Baby” lasted late into the night, and this was in addition to the hours Tolkien spent in his study pouring over student papers and exams. The film only hints at this reality, but it does so while maintaining its focus on the author’s creative journey. We can hope that Edith found ways to forgive him and cherish the time he did spend with her, as the movie depicts in their strong partnership.

And, as to Tolkien’s creative journey, Dome Karukoski, the director, and the writers, David Gleeson and Steven Beresford, treat viewers to haunting images of Tolkien’s fantasy woven into depictions of his waking life. Suggestive rather than merely demonstrable, we view these images with our knowledge of Tolkien the master storyteller well in mind. They show the author in a way that owes its allegiance to something Tolkien might have done himself, had he turned to film for his art, for it is subtle and compelling without claiming specific connection between real events and those of Tolkien’s legendarium. We leave the film with the sense of something like what it must have been to create stories of heroic myth while living in a reality that demanded such stories as ways to deal with it. We are treated to that in Tolkien’s relationship with Edith and his survival of the Somme.

For, the movie’s treatment of the horrific Battle of the Somme Valley will underscore the realities of war. I have read George R.R. Martin’s idea that the main theme of The Lord of the Rings is War and Good Government. I reject that idea totally and insist that Tolkien’s consistent themes are Hope and Sacrifice. I’ll table that idea for later, but I mention it here only to convey what a powerful resource the Tolkien biopic is for understanding the reality from which Tolkien emerges as the greatest fantasy writer of the twentieth century. That battle, which rages on with Tolkien near prostrate with trench fever, forms the “present” time of most of the film, which finds the author scribbling stories and sketches before he leaves his bunker in order to find his best friend, one of the lads with whom he grew up, who hadn’t been heard from for several days. No biography written thus far has done the needed justice to this part of Tolkien’s life that this film does. Visceral, bleak, shocking, hell-on-earth images await viewers, and I would not hold back any Tolkien fan from seeing them. They are a necessity for seeing the hope and sacrifice that were central to this man’s work.

And, as for the one negative criticism I have, it is merely about the casting. Nicolas Hoult does a fine job with the role, as do all the other actors, especially Lilly Collins as Edith Bratt and Anthony Boyle as Geoffrey Bates-Smith. However, young Tolkien as played by Harry Gilby, has a marked resemblance to Tolkien himself at that age (see photo above) and it is something of a shock to pass back and forth between Tolkien (Hoult) in the trenches and Tolkien (Gilby) in school at Birmingham. It was the one jarring reality of the film to which I reacted negatively. Choosing a young actor who resembled the real Tolkien less and finding a youngster who resembled Hoult might have saved that from happening. It seems to me to be the films one error.

However, it should stop no Tolkien fan from watching and enjoying this beautiful work by Dome Karusoski. I think he would agree with me about the themes in Tolkien’s work being Hope and Sacrifice, for both are evident in this work.